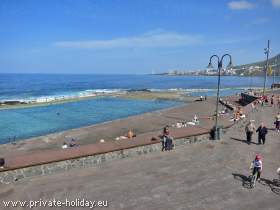 Bajamar is located in the north of the Canary Island Tenerife at the western edge of the Anaga Mountains. It is a little town with a lot to offer.

This little magic place is a part of the university town San Cristóbal de La Laguna (14km away) and is all times popular for overwinterers. Luckily mass touristy hotel complexes have never been established here. That's why it is possible to spend quiet and relaxing holidays at the beach far off the hustle and bustle. Only since the 70ies, Bajamar has developed from a fishin village into a holiday resort. Until now, it preserves its original rural character. Even today, locals mainly live on fishing and agriculture instead of tourism. Read more


Two very big natural swimming pools (Piscinas naturales) belong to Bajamar. They have a water surface of around 500sqm and can also be used, when there is a bathing prohibition at the small local beach because of too strong waves. The entry is free, the pool is barrier-free accessible and a public part of the town. Changing rooms, showers, coffee shops and restaurants are available too.

Holiday rentals like spacious and cultivated holiday houses, apartments and fincas exist at this idyllic spot in Tenerife also only in a limited number. The demand for properties in Bajamar is therefore higher than the supply.

Another advantage of Bajamar is the surrounding landscape. The beautiful nature in the green north is a paradise for mountain bikers and hikers. The adjacent Anaga mountains offer numerous routes and trails with fascinating views. Besides, just as El Médano in the south, Bajamar is considered as the surf-hotspot in Tenerife. Generally, Bajamar is the ideal town for those, who want to experience the nature and the Canarian charme but at the same time live close to the big cities.

In a distance of almost 15km, you can also play some golf. In the Real Club de Golf de Tenerife there are 18 holes available for the passionate golfers. From Bajamar it is a half an hour drive with the rental car into the capital city - Santa Cruz. The southern airport is reachable within a good hour of driving. If you live in Puerto de la Cruz and only want to visit Bajamar, that is also possible. In 45 minutes you will reach the destination by car, but you can also use the public buses.