Webcam on the north coast of Tenerife 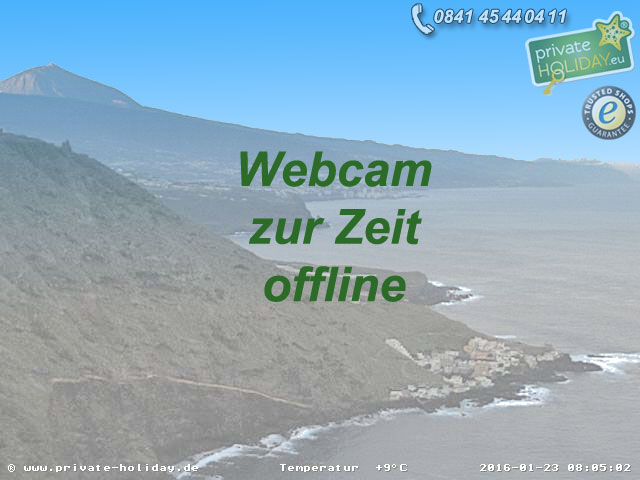 The north coast of Tenerife with its green hills, breathtaking views of the sea and pretty small towns like El Sauzal, La Orotava and Icod de los Vinos, is a feast for the eyes. You can either book a holiday apartment or a holiday house directly in these small towns or choose a more central location, for example Puerto de la Cruz, which is a vantage point to discover the surrounding areas with trips.

Apart from the view in the magnificent scenery with a varied vegetation, there is a lot to explore. In Icod you will find for example the huge and approximately 400-year-old dragon tree 'Drago Milenario" and also a worth seeing butterfly zoo. In La Orotava, a major cultural center in Tenerife and wine-growing district, you can also find beautiful historic churches. This small town is located in the picturesque Orotava Valley, which was declared a UNESCO World Heritage Site in 2007 and whose view even inspired the famous scientist Alexander von Humboldt - and you certainly aswell!

Puerto de la Cruz, one of the largest and most diverse cities of Tenerife, it is the tourist center of the north coast. There are a lot of great holiday houses for an excellent holiday and numerous possibilities for excursions. The Jardín Botanico attracts with its vast collection of plants up to 400,000 visitors annually. Among many interesting sights, is a strangler fig and the somewhat bizzare sausage tree. The Loro Parque, a huge animal park with dolphin- and orca shows, is one of the most popular attractions in Tenerife. For a visit you should better plan a whole day. The inviting of Puerto de la Cruz is also the direct location on the beach, so that you can as often jump in the sea and stroll on the beautiful beach promenades as you like.

The north coast of Tenerife has indeed a lot to offer. If you like to convince yourself of it, just chose your perfect holiday house or holiday apartment to your liking.