A tremendous pleasure for the whole family - The Loro Parque

When you spend your holidays on the Canary Islands, everyone will recommend you visiting Loro Parque, which is located in the midst of Puerto de la Cruz. Honestly, as a tourist, advertisment for Loro Parque can't be avoided. No matter if in the hotel or in the tourist destinations (for example Los Cristianos or Puerto de la Cruz), there are brochures everywhere. It is also possible to buy a twin-ticket for the Loro Parque and the waterpark Siam Park. In addition, there is advertisement everywhere: on garbage cans as well as on public buses.

Is Loro Parque worth seeing ? Here are some information so that you can build your own opinion.

It is recommended to plan a whole day for your trip to Loro Parque. A few hours won't be enough, if you want to see everything, especially when you travel with kids. Loro Parque has a size of 13 ha. Also, there are numerous attractions and shows. Furthermore, there are many extraordinary animals, such as colourful macaws, flamingos and meerkats. The ticket price for adults is 34€ and for children 23€.
The Loro Parque opening hours are from 08.30am - 06.45pm on every day of the year.
Attention: For the welfare of the animals, please do never use flashlight when taking a picture. 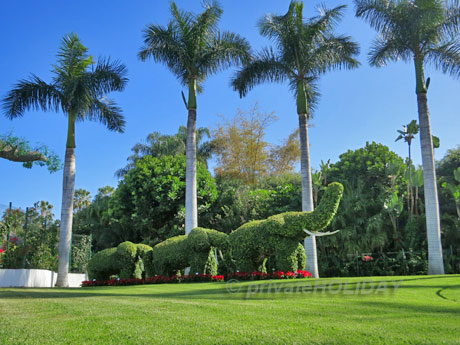 At the entrance, the first thing you'll see is the Thai village. Since 1913 Thailand and Tenerife have a close relationship. 80 years later the Thai village was created in Loro Parque to show the closeness between the two countries. The Thai princess Gaylani Vadhana ceremonially opened the village.
When you enter the park it can become a bit stressful due to the queues in front of the admissions desks and the village. When you bring a baby carriage it can become a little too tight in the entrance area.  After entering the park you have the chance to get a picture of you at a photo stop and you can buy tickets for the 90-minutes long Discovery Tour.
For those 3 reasons (Admissions desks, photo stop, Discovery Tour information), espcially in the summer months, long waiting lines can occur.
If you don't want to go on the discovery tour, you will find an orientation map after only a few minutes of walking. There you also can have a look at the schedule for all 7 different animal shows (Loro Show, Orca Ocean Show, Dolphine Show, Sealion Show and the attractions Acuario, Planet Penguin and Natura Vision).

Gorillas, white tigers, anteaters, capybaras and coatis are only a few highlights of the animals that you can see in Loro Parque. While you're walking through the park you can also have a look into the beautiful ponds with its koi carps. The paths between the enclosures are fascinatingly beautiful and show you a wonderful flora and fauna. Also, there are 2 picnic spots, 8 restaurants and bars, 10 smoking areas, 8 toilet facilities and one ATM.

The animal shows
The 4 animal shows (Loro Show, Orca Ocean Show, Dolphine Show, Sealion Show) are scheduled several times a day. It is recommended to arrive 15 minutes before the show begins. Especially in the peak travel periods it can happen that there are not enough seats (except you have a Premium Ticket). The shows last around 20 minutes. You can expect long waiting lines, when a show finishes and another one is about to begin. 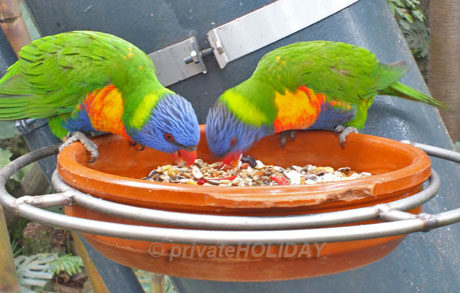 This is a parrot show. In the early 70ies, Loro Parque was named after the parrots. Even today you can see many endangered birds in Loro Parque. In the Animal Embassy you can also watch how parrot chicks get treated. The Loro Show is Europe's first parrot show and can be seen 6 times a day. You can watch the most beautiful parrots that sometimes even fly above your head. Some lucky children also get the chance to feed the parrots. You can watch the shows at: 10.25 am, 11.50 am, 01.30 pm, 03.00 pm, 04.30 pm and at 05.30 pm.

The Orca Ocean Show
This show is one of the park's most popular ones. In 22 million litres you can watch 6 orcas (named Tekoa, Adán, Skyla, Morgan, Keto and Kohana). Sadly, the Orca Ocean show also got well-known, because in 2009, one of the orcas killed a trainer of the show. That's why the visitors should always be aware that the shows depend on the orca's moods. So don't be surprised, if the show gets interrupted early or even canceled. It doesn't happen often but there is always a risk. The Orca Ocean Show itself is a highlight of the park. At the beginning of the show, the visitors are filmed with a hidden camera and can then see their faces on the big screens. There is also a Kiss-Cam. Visitors also love the so called Splash Zone. If you're standing there, chances are high that after the show you'll be wet from top to bottom. You can buy a rain protection at the entrance of the show. It is a good opportunity to also protect all your electronical devices from the water.
Often there are enough seats in the last rows. You will also get lots of information on the animals. You can watch the show at 11.45am, 02.00pm or at  04.45pm.

The Dolphine Show
The Dolphine Show is also very popular in the park. The show takes place at the Dolphinarium 4 times a day. At 11.00 am, 01.15 pm, 02.45 pm and at 04.00 pm. Children often get integrated into the show. Sometimes they can for example get on a boat and float through the pool. Just like every other show, this one always depends on the mood of the animals. So it can always happen, that the Dolphine Show gets interrupted early or even canceled. This show also has an educational mission and among other things, it informs you about gender-specific differences of the dolphines.

The Sea Lion Show
This show can be seen 5 times a day, at 09.35am, 12.30pm, 02.15pm, at 03.15pm and at 04.55pm. There is often not such a massive interest in this show than in the Orca Ocean Show. But the sea lions always enthrall the visitors with humor and charm. Children in the front row also sometimes get the chance to touch the sea lions.

Planet Penguin
Only a few walking-minutes away from the entrance there is the Planet Penguin attraction. With the help of a conveyor you can immerse in the arctic world of Happy Feet. There are around 250 penguings including rockhopper penguins and king penguins. Planet Penguin opens at 08.30 am and closes at 06.00 pm.

Acuario
We recommend you to visit the Acuario either in the morning hours or in the late afternoon, if you want to enjoy this underwater world in a calm and pleasant atmosphere. The popular shark tunnel contains many kinds of fish and sharks. In this underwater tunnel, the sharks will swim above your head. The Acuario opens at 10.00 am and closes at 06.45 pm.

Aqua Viva
The Aqua Viva was created in 2014 and also enchants the visitor with its calm atmosphere. The magical world of the jellyfishes will almost remind you of a fantasy world. There are many different types of jellyfish. It is a very unique experience, which usually only experienced divers can see. The Aqua Viva can be found in close proximity to the Orca Ocean World.

Kinderlandia
In the midst of the park, children can have lots of fun either on a roller coaster that looks like an orca or on a playground in the style of an African village. Additionally, children can get their faces painted.

Katandra Treetops
Katandra Treetops is a free flight aviary over an area of 27.000 sqm. Here you can watch birds with the most beautiful plumages as well as a range of exotic birds. Don't forget to bring your camera (but no flash please). Be aware that it can get a little wobbly on the hanging bridge.

Natura Vision
Natura Vision is a cinema in the park. Here you can watch an HD movie in 3 different languages (Spanish, German, English).