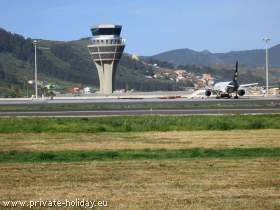 Already in 1946 the airport "Aeroporuerto de Tenerife Norte" was opened.

The smaller but older of the two airports also was the starting signal for the tourism or rather the mass markets story of success of the biggest of the Canary Islands Tenerife. Until today the airport transports about 4 million people.

A strong competitor came in 1978. In that year the airport was replaced by the southern airport (TSF) for the pure tourist transfer.

Today the northern airport offers a high safety standard, but is only used for 30% of the air traffic volume on Tenerife, mainly only for domestic flights and flights within the Canary Islands (to El Hierro, La Gomera, La Palma, Lanzarote, Gran Canaria or to Fuerteventura) by the regional airlines especially by the local airline Binter Canarias.

Occasionally the airport can still be approached from northern and middle european countries.