Regardless of whether you are a carnival lover or not – you shouldn’t miss the carnival on Gran Canaria! During this time, the popular island presents itself in a colourful and crazy way. Sambarhythms and great weather contribute to a special atmosphere. 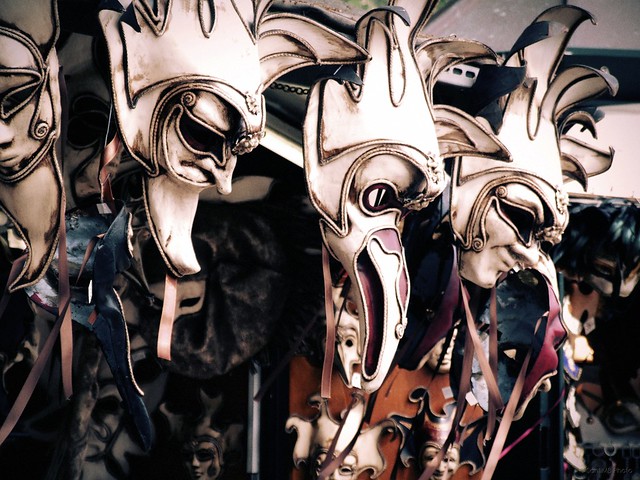 The carnival of Gran Canaria can keep up with other world-famous carnivals.

Three months of preparation are necessary before the carnival can start in February. The programme lasts over about three weeks every year.

The Canarios love their Carnival and thanks to the good weather and the many natives with South American roots, this great festival can be well compared to the carnival of Rio de Janeiro. However, it is not a poor imitation of the latter!

The colourful, glorious costumes can weigh up to 60 kilogramme and are sewed and decorated with a lot of love and effort. Groups of samba and salsa dancers prepare fanatstic dances that they finally present with a lot of passion. Of course, there are also music groups for this occasion that play thrilling rhythms, so that nobody wants to stand still. Furthermore, the candidates for the selection of the carnival queen play an important role during the carnival. They have to make a strenght training before the carnival starts, so that they can present their costumes with elegance and a smile if they finally win the selection. 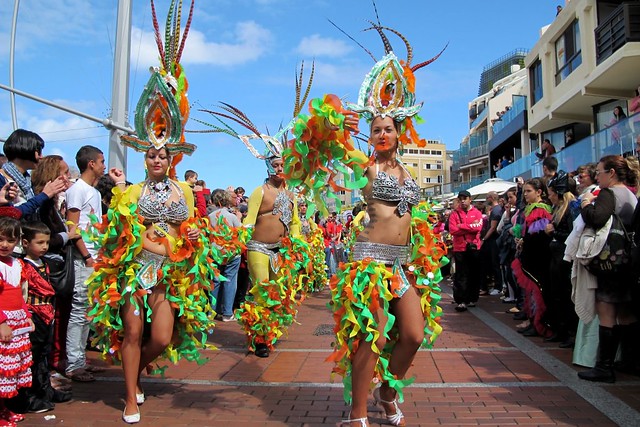 The elaborate costumes of the Carnival.

The Selection of the Carnival Queen

As opposed to Germany, the dates of the celebrations during the carnival are not bound to particular days. Every community has its own festivities and the biggest ones are of course in Las Palmas, Maspalomas, Agüimes, Agaete and Telde. However, one rule for the dates does actually exist: The events always start in the North and end in the South. Thus, the big parades of Las Palmas and Maspalomas are about three weeks apart.

One of the most important events that is celebrated with a lot of pomposity is the selection of the carnival queen. This is a real spectacle, as the candidates are not only the most beautiful young women and girls from the Canaries, but also wear costumes of several thousand euro that are very colourful and made with a lot of phantasy. The queens wear those masterpieces in combination with a headdress that is up to three meters high. The selection of the queen is even broadcast on TV with its own show and moderation. 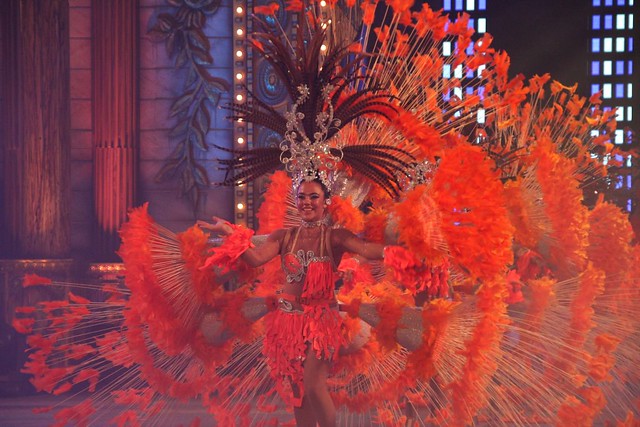 The costumes of the queens are magnificient and very heavy.

For a number of years now, the gay scene also selects their Drag-Queen! This is a very glamouros event as well, but a lot shriller. You should definitely not miss it!

The Parades of the Carnival on Gran Canaria

For the parades, that are of course a very big attraction in the cities and streets, there are many different wagons. However, they all follow the same motto.

Several months before the carnival, the citizens vote for a motto. The motto that finally wins has to be used by all participating wagons and groups. The long caravan of wagons, dancers and music groups is going through the streets in a colourful spectacle. There are always about 100 wagons participating in the parades! All of the participating groups are dressed in an imaginative and creative way.

By the way, the spectators are usually dressed up as well. Often, you can see men dressed up in women’s dresses. The tradition of men wearing high heels, skirts and tights has already been established in the Carnival of Gran Canaria. The carnival in the streets is always an event with much fun and a great atmosphere. Join the celebrations and have fun! 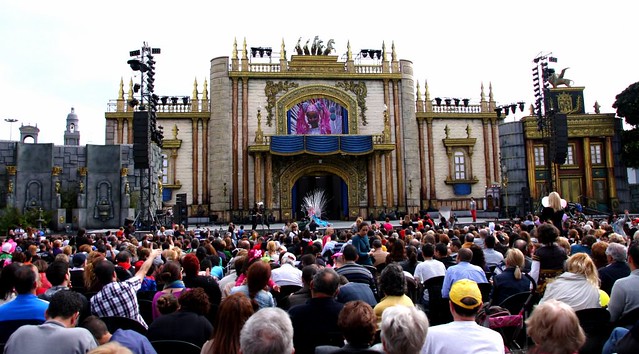 The Funeral of the Sardine as the End of the Carnival

Everything is over on Ash Wednesday? Not on Gran Canaria! First, there is the funeral of the sardine. Nobody still knows why the funeral of a huge sardine is accompanied by a rather funny parade. It is just a tradition that already exists for decades. During the parade, the sardine is burnt and widows mourn over it. Afterwards, there is an impressive firework with a fiesta, that lasts until the next morning. Every year, hundred of thousands visitors come to the carnival of Gran Canaria, only to experience this unforgattable spectacle. At this time, all the hotels are fully booked. Therefore, it makes sense to book a private accommodation on Gran Canaria.

The motto in Maspalomas this year is „Europita Wurst“, which refers to the Eurovision Song Contest winner Conchita Wurst. Especially for the gay scene, this might be a great motto.