Everyone who spends some time on La Palma should definitely visit the Nationalpark Caldera de Taburiente. Impressive mountains and rocks, deep canyons and thick coniferous forest: There’s a reason why this region is La Palma’s most popular and beautiful attraction.

To inform yourself before actually visiting the Park, you can go to the Tourist center in El Paso. It explains well the history, geology and nature of the Nationalpark. To fully experience the atmosphere of the Caldera, you should grab your hiking boots and follow one of the most impressive hiking routes of the island.

The most popular hiking route starts near the Mirador de Los Brecitos.

The easiest way to get there is by taking a cab. Even though the price of nearly 50 euro for the drive is quite expensive, the views and impressions will be worth it. The route takes you downhill along the mountain slopes, covered by thick, odorant pinewoods. You can already catch a glimpse into the breathtaking Caldera (in english “kettle”) from Miradores like the Mirador Lomo de Tagasaste or the Mirador de las Chazos. The Caldera has an caliber of 9 km and an extent of nearly 28 km.

View over the Caldera from the Mirador de Los Brecitos. Photo: Tom de Mulder via Flickr, licensed under CC BY-NC-ND 2.0

The route further leads to the arroyo of the Río de Taburiente, one of the few rivers on the Canary islands that flows during the whole year. Even though you’re clearly nowhere near the Atlantic ocean, you can still rest on a beach: The Playa de Taburiente consists of igneous rocks instead of sand, but still it’s a nice place for cooling yourself off.

Near the arroyo you will find the only spot where you can spend the night out here: The camping site of the Caldera with an area of 15.000 qm.

You can pitch your tent in the middle of impressive mountain ranges.

There is a tourist centre as well. If you want to stay the night, you have to make a reservation at least 24 hours before arrival. Also the visitors have to bring all needed equipment with them (also the tent itself!). However, the nature and its residents are mostly harmless, so in summer you might also sleep directly under the open sky. It is highly recommended that you take the route from Los Brecitos, because other existing routes are more dangerous. For example on the route starting at the Mirador La Cumbrecita have been lots of accidents happening.

Another interesting spot in the Caldera is the Roque de Idafe, located in the centre of the region. The natural monument is nearly 100 meters high. Tourists can not reach it because of the thick vegetation around it, so it’s in a really good condition. It arose from the erosion of surrounding gorges. In the past it was admired by the canarian natives, the Guanches, and even sacrificial offerings took place.

Because of its shape, the rock was considered to be a support between sky and earth.

The route also leads you to the Barranco de las Angustias, which more or less means “gorge of agonies”. This might cause an unpleasent feeling, but it’s no reason to worry. If you look closely and choose the right diversion from the route, you will discover a colorful cascade (Cascada de colores). The imposing, six meter high cliffs shimmer in yellow, orange and green. It’s a really beautiful natural spectacle. The colors are due to the algae and high iron content in the water.

At the northern slope of the Caldera, the Roque de los Muchachos rises up to a height of roughly 2.426 meters. 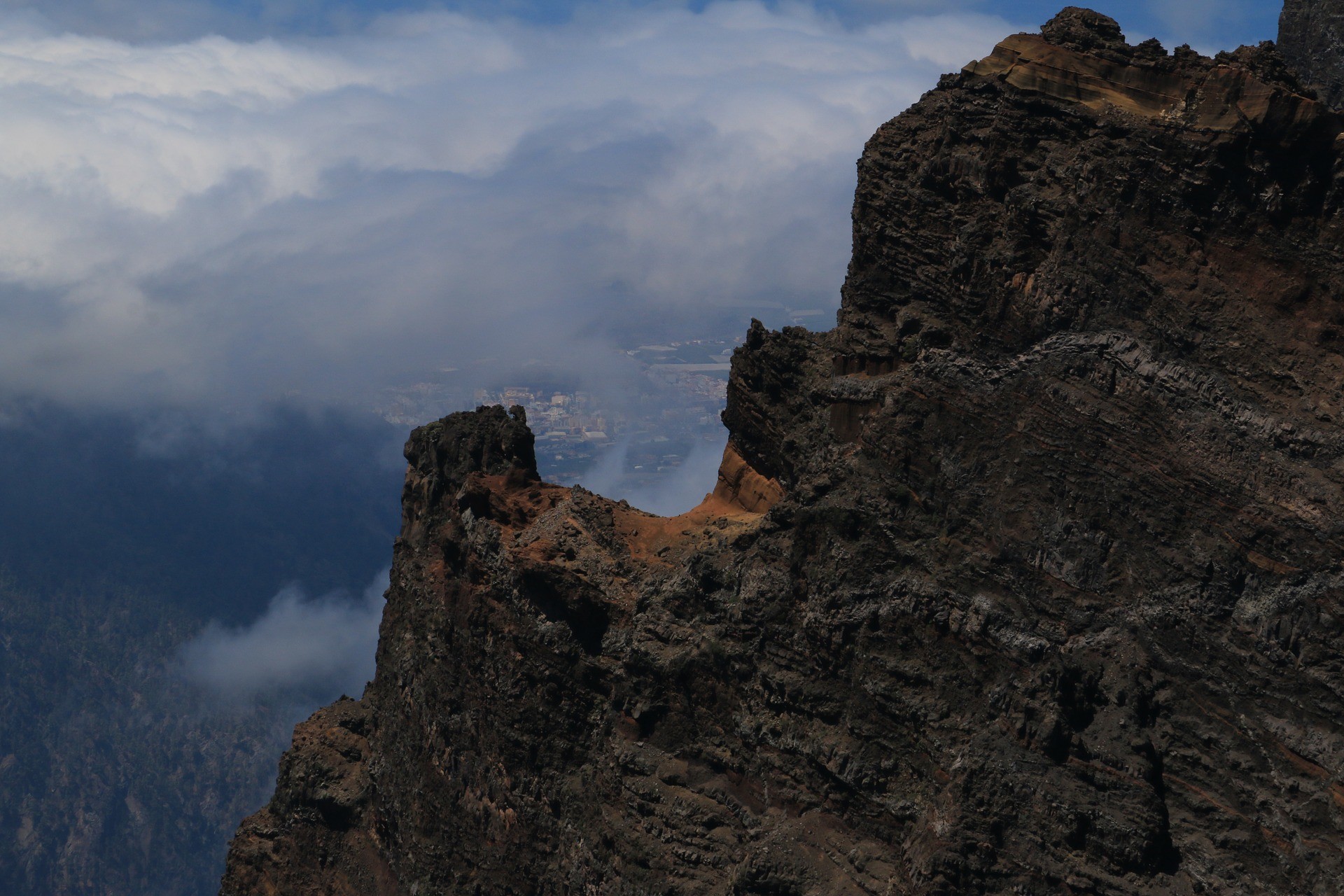 It is not only the highest spot of the Caldera, but of the whole island.

The Mirador of the same name provides the best view over La Palma. If you’re lucky and the weather is good, you can also see the sorrounding islands Tenerife, La Gomera and El Hierro. Near the top of the mountain there is a meteorological observatory. It contains 10 big instruments to observe the sun and the sky.